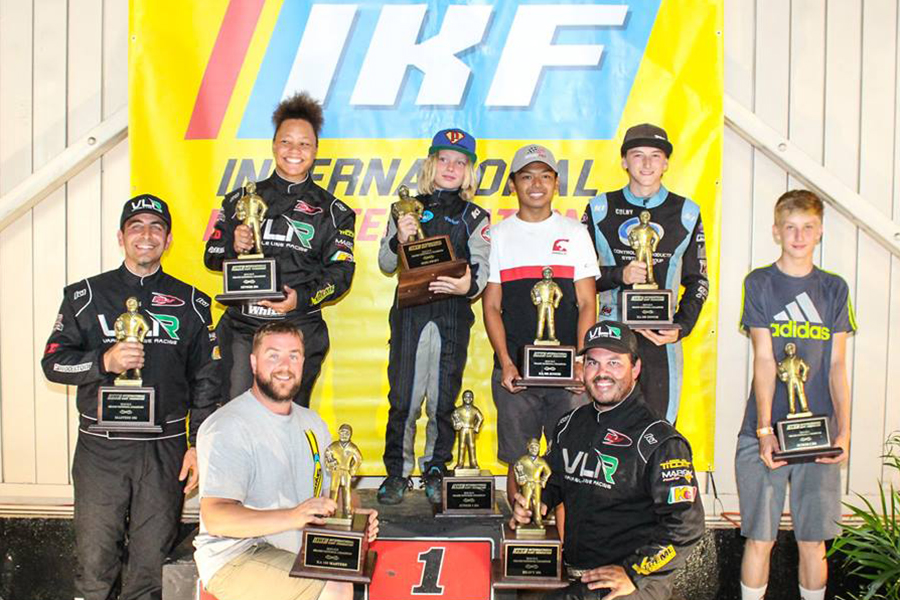 The Duffy award (named after the late Duffy Livingstone), is arguably one of the most coveted trophies in North American karting – if not the sport as a whole. With the International Kart Federation (IKF) changing hands, questions regarding the future of the organization understandably emerged. Would the IKF Grand Nationals as a whole exist amongst the slew of other championships? And if so – what would the modern day Grand Nationals look like? Does anyone even care about the IKF anymore? 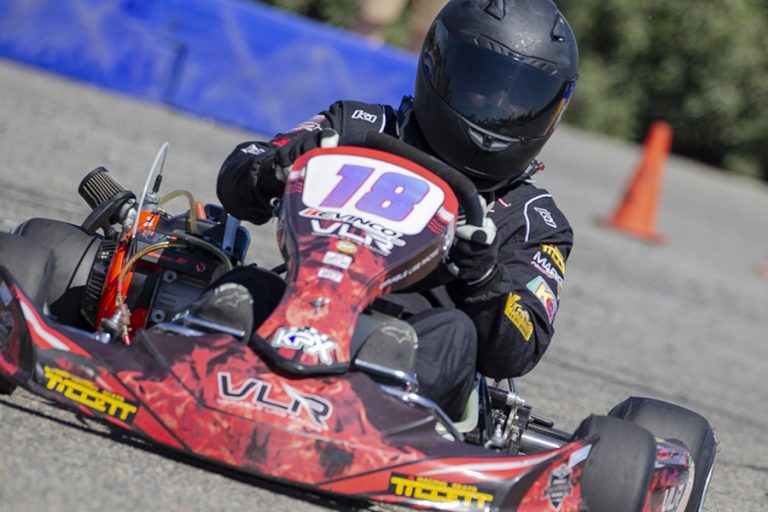 Those questions were answered emphatically this past weekend in Fresno, California after a terrific weekend of grassroots racing at the KPX Karting Championship / Central California Kart Racing Association hosted 2 and 4 cycle IKF Grand Nationals.

140 of the nation’s best sprint kart drivers descended upon the ‘The Big Fresno Fair’ for their shot at top honors in grassroots kart racing. The event was a successor to the previously scheduled event in North Texas, which was regrettably canceled. Local event promoters KPX rose to the occasion and agreed to take on the task of hosting the event with relatively little time to promote it. The end result was a terrific event with camaraderie and great club atmosphere. Racers and families alike left the facility with one resounding takeaway. IKF is here to stay. 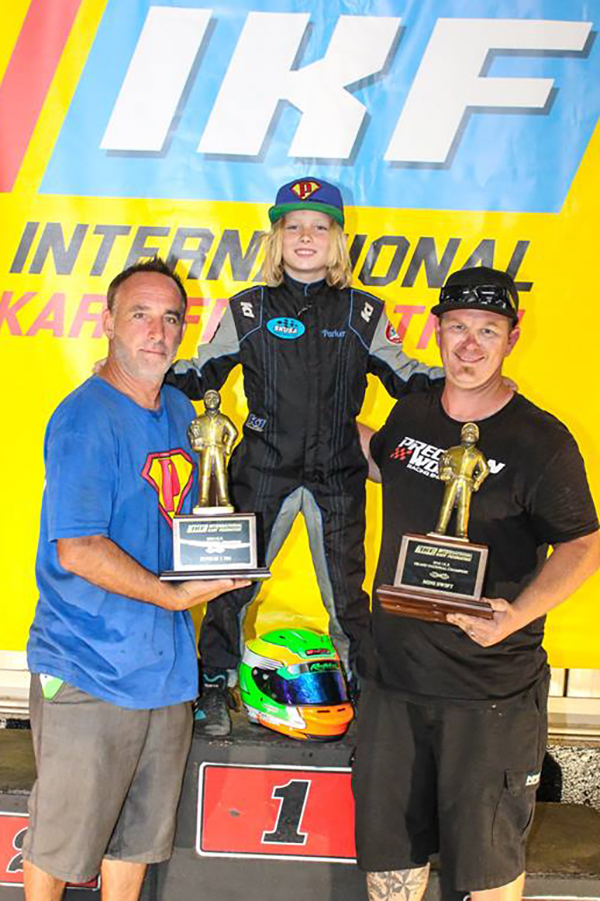 The Briggs 206 format has been a runaway success since its inception. 61% of the entries were powered by the Briggs & Stratton engine, providing some exciting racing all weekend long in the five divisions. Complimenting on the 2 cycle side was the growing KA100 powerplant from IAME along with the Mini Swift engine for Cadet racers to make up the four remaining classes.

The Masters class is arguably as competitive as it gets, attracting both karting veterans and newcomers alike. The VLR chassis was the standout of the weekend and dominated most of the 4 cycle racing. Mike Smith took the coveted pole position and the Screaming Eagle along with it. However, heat race contact spelled a tweaked chassis and meant Smith would have his hands full in the main. Adam Verlengiere starting third, knew what had to be done. The karting veteran made a late race move on lap 16 to overtake Smith, earning the Duffy in the process. Smith, who showed paced all weekend, had to settle for the runner-up spot. Brian Hill rounded out the top-three with a great drive from ninth to third,

The action was intense from start to finish in the Mini Swift class. Mathias Coito showed early speed in qualifying and looked to be the favorite. Coito took the opening heat race win while Parker DeLong was named winner after Coito flipped on the final lap of Heat #2. DeLong started from the front row and fended off competition from those eager to capitalize on any mistakes. Logan Toke managed to snag the lead briefly on lap 14, but DeLong quickly regained his position with authority. Tristan Young and a charging Coito gave chase to stay with the lead duo, but Parker was not to be denied. DeLong led when it counted and crossed the line as the winner, earning a national championship for his efforts. Toke settled for second with Young earning the final podium position. 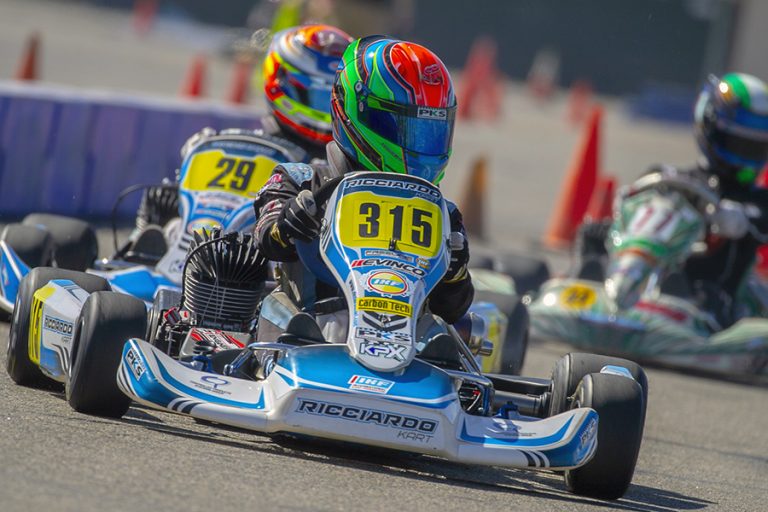 This category was anything but boring. Oliver Calvo took an early lead on lap 2 over Toby Longeneker, the pole sitter in qualifying. Toby fell as far back as third and looked out of the running with one lap to go. Longeneker managed to steal the lead on the final circuit, crossing the line first on the track, but lost the battle for his Duffy in the post-race tech proceedings. Officials deemed Aiden Kempf as the rightful winner, with Oliver Calvo in second, and Isaac Bourque in third after setting the fastest lap of the race.

Colby Dubato was a determined driver all weekend long in KA100 Senior. After snatching the pole position, the Californian was the man to beat in both heat races. Fellow Ricciardo kart driver, Jake Drew, made it an all blue affair. For the Final however, Drew would fall back through the field while Dubato and Nick Ramirez led the way. On lap 4, Dubato got out front and stayed there, leading the remaining 14 laps to win by almost a half second clear of the field. Ramirez settled for second with Tomas Mejia earning the third step on the podium. 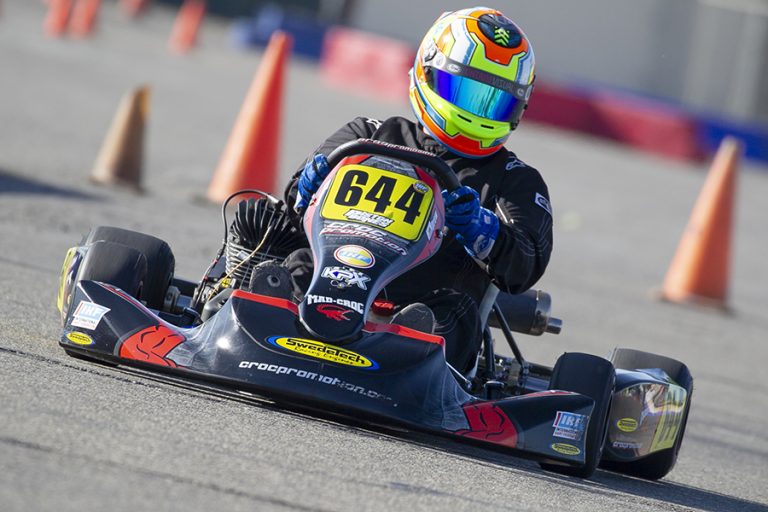 Geoff Shaw put the stamp of authority on his quest to win the 206 Heavy Duffy. With a decisive pole position, however, things turn the opposite direction after crossing the line first in Heat #1. Shaw was credited with the win, however, a carburetor change forced him to start the second heat from the tail of the field. This gave Mike Smith the path to win Heat #2. Shaw fought his way up to the fifth spot, setting up for a challenge in the Final. Shaw took over the top spot in the Final on lap three, posting fast laps of the race to drive to a 1.1-second advantage. Brian Hill drove to second with Tyler Agan beating Smith for the third spot on the podium.

KA100 Masters may have only had six drivers, but the field was anything but lackluster. MMK’s veteran driver Kevin Manning set the pace early in qualifying, earning the esteemed Screaming Eagle. Heat race contact resulted in disaster for the Californian and Manning was left with a broken chassis for the remainder of the weekend. This allowed Derek Zimmerman to take the win in Heat #1 before Andrew Kemp took control in Heat #2. Kemp would go on to lead every lap of the Final to take a comfortable win and the Duffy trophy for his troubles. Manning fought back to finish second, earning fast lap of the race to beat Zimmerman for the runner-up spot. 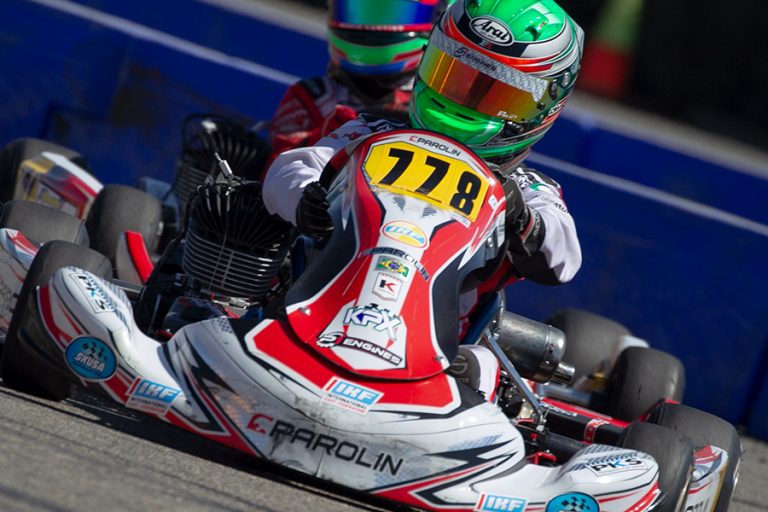 Doing double duty is nothing new at an IKF Grand Nationals. Parker DeLong capped off the perfect weekend and made it two for two. Parker took an early lead on lap one over Heat #1 winner Jackson Menchu and never relinquished it. At the end of 18 laps, DeLong crossed the stripe with his second Duffy of the day and entered the books of “IKF Experts” alongside some elite company. Heat #2 winner Logan Chambers was a close second with Menchu in third. Screaming Eagle winner Jack Schrady was fourth.

After some unfortunate luck in the 4 cycle class, Olver Calvo hit pay dirt and took the victory in the KA100 Junior class. Calvo capped off the perfect weekend in the class, taking both the Screaming Eagle and Duffy in the group after winning both heat races. Oliver went flag-to-flag in the main and put the stamp of authority on his weekend after showing speed all year long. Matteo Sandoval ran second with Cole Gamma in the third spot. 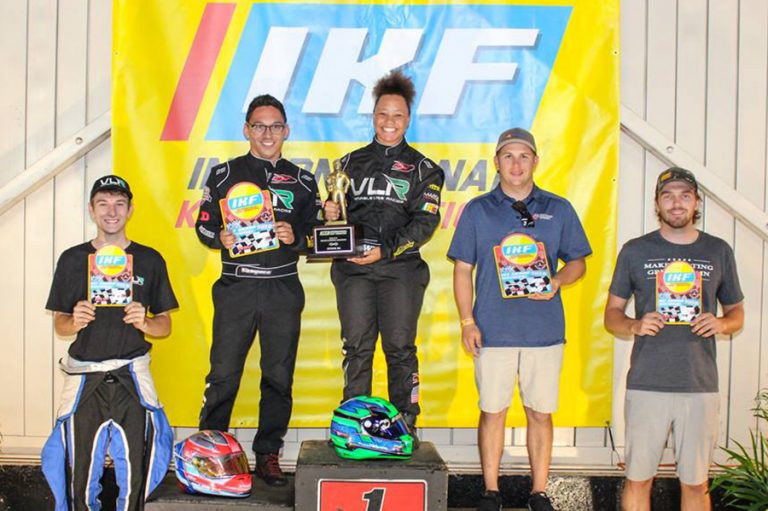 Alieja White joins the list of female Duffy winners with her triumph in 206 Senior (Photo: EKN)

The final race of the day was nothing short of amazing. Donald Durbin Jr. showed early speed by virtue of snatching the fast time in qualifying and take home the Screaming Eagle. David Vasquez grabbed the win in Heat #1. Alieja White was right there behind Durbin and Vasquez, before earning the win in Heat #2. White and Vasquez went back and forth during the 18-lap Final. When the final checkered flew, it was all VLR and White on the top step of the podium. Vasquez settled for the second spot, earning fast lap of the race, with Tyler Agan joining them on the podium in third. White joins a list of female winners of the IKF Duffy, including the famous Faye ‘Ladybug’ Pierson, Kathy Hartman and others.

To cap off the event, IKF presented the Lake Speed Achievement of Excellence Award. The perpetual award honors the 1978 World Karting Champion Lake Speed. Receiving the award from this year’s Grand Nationals was John Motley. A longtime IKF member, Motley has been one of the key tech officials for the organization and the sport in general.